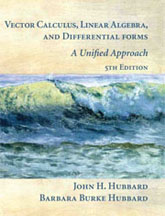 Return to the main page for this book

The initial impetus for producing a new edition rather than reprinting the fourth edition was to reconcile differences in numbering (pro­positions, examples, etc.) in the first and second printings of the fourth edition.

An additional impetus came from discussions John Hubbard had at an AMS meeting in Washington, DC, in October 2014. Mathematicians and computer scientists there told him that existing textbooks lack examples of "big matrices''. This led to two new examples illustrating the power of linear algebra and calculus: Example 2.7.12, showing how Google uses the Perron-Frobenius theorem to rank web pages, and Example 3.8.10, showing how the singular value decomposition (Theorem 3.8.1) can be used for computer face recognition.

The more we worked on the new edition, the more we wanted to change. An inclusive list is impossible; here are some additional highlights:

We rewrote the discussion of multi-index notation in Section 3.3.

We rewrote the proof of Stokes's theorem and moved most of it out of the Appendix and into the main text.