Return to main page for this book 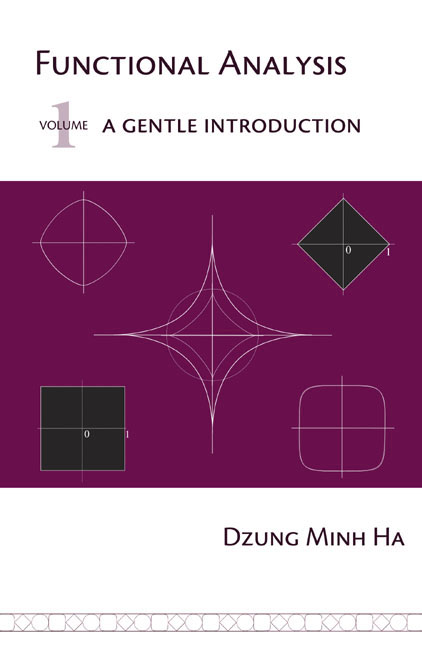 This book is designed as an introduction to basic functional analysis at the senior/graduate level. It has been written in such a way that a well-motivated undergraduate student can follow and appreciate the material without undue difficulties while an advanced graduate student can also find topics of interest: topological vector spaces, Kolmogorov's normability criterion, Tychonov's classification of finite-dimensional Hausdorff topological vector spaces, and the theorems of Korovkin and Muntz, to mention a few.

Textbooks in functional analysis (or more generally, in mathematics) are often unnecessarily demanding — written in a concise manner with few examples and motivations. Proofs in such textbooks are sometimes so terse that much time and energy are required of students just to verify their logical correctness, let alone understand the ideas behind them. This is counter-productive: students are given the impression that mathematical proofs are mysterious; the proofs fail to convince readers of the validity of the theorems; and students are deprived of an opportunity to learn useful techniques and principles in problem solving.

In contrast, the pace of this book is deliberately slow but thorough. I chose to write a textbook that I would like to have studied from as a student— one that is mathematically rigorous but leisurely, with lots of motivations and examples. This is a student-friendly book that can be read and enjoyed by a reasonably well-motivated undergrad. Proofs are developed in detail, with all steps justified. Almost all previously proven results used within proofs and solutions to examples are explicitly cited, and referred to by number. This eliminates unnecessary time and frustration spent figuring out exactly which results were used and where they were first proved.

Only a working knowledge of elementary linear algebra is assumed. For students whose background in linear algebra is not up to par, an appendix has been included for review. As for analysis, except for Section 6.3, only first year calculus is needed!

All standard topics in an introductory course are presented and proved in detail. Among these are:

The book also covers some results not covered by many books on the subject at this level. These include

Definitions, theorems, lemmas, propositions, corollaries, and examples all share the same numbering system: Theorem 1.7.29 in not the 29th theorem of Section 1.7, but the 29th numbered item of Section 1.7. We often refer to previous results; this system makes them easier to find. Figures have their own numbering system, within chapters: Figure 2.3 is the third figure of Chapter 2.

All definitions and results are carefully stated. Relevant definitions are given before being used to avoid guesswork on part of readers.

The book contains about 250 examples, many containing several sub-examples. In addition to showing how certain results or techniques may be applied in a concrete situation, they motivate more general results yet to come. Many examples have solutions that make use of several concepts or results.

I believe that to understand how something works, one needs to understand why and when it does not work. In keeping with this philosophy, numerous counterexamples are given. For instance:

A contraction on an incomplete metric space may have no fixed point (Example 1.12.6).

A topological vector space with a convex local base but no bounded neighborhood (Example 2.6.1).

The book contains about 800 exercises, none of which is used in any results or proofs given in the main text. More than half have not appeared elsewhere. Several exercises develop additional interesting results, such as Weyl's theorem and Fejer's theorem, or extend topics introduced in the book (such as compact operators and locally convex topological vector spaces).

An appendix gives detailed solutions to all odd-numbered exercises.

The 17-page index will allow for a quick search of all results and con­cepts developed within the book. index (in pdf)

The three fundamental inequalities used throughout the book (and elsewhere in many parts of analysis) are developed in Chapter 0.

Chapter 1 introduces metric and topological spaces; it is the foundation for the rest of the book. Continuity, convergence of sequences, completeness and completions, compactness, and separability are carefully developed. Among the results presented are the Bolzano-Weierstrass theorem, the generalized max-min theorem, the Banach fixed point theorem, the Baire category theorem, Dini's theorem, and the first uniform boundedness principle.

Chapter 2 examines the algebraic-topological relationship that exists within normed spaces. The continuity of vector space operations in a normed space is used to introduce topological vector spaces (X,G). We then show that the invariance of the topology G under nonzero scalar multiplication and translations has important consequences. A study of Minkowski functionals and semi-norms culminates in Kolmogorov's normability criterion. Banach spaces, infinite series, and Schauder bases for the various lp spaces are studied. We introduce linear functionals and give various characterizations of its kernel. The quotient vector space and the quotient map are introduced, along with quotient normed spaces.

Chapter 3 studies a special class of well-behaved functions between topological vector spaces - the class of continuous linear operators. In the case of the Fredholm and the Volterra integral operators, simple formulas for their norms are given. Section 3.3 discusses linear homeomorphisms and proves Tychonov's theorem. We show that it follows from Tychonov's theorem that a finite-dimensional vector subspace of a Hausdorff topological vector space is closed. From this and the Baire category theorem, it is shown that an infinite-dimensional Banach space cannot have a countable (Hamel) basis. Several equivalent conditions for a vector space to be finite dimensional re also given.

Section 3.4 presents the Banach-Steinhaus theorem, the open mapping theorem, the closed graph theorem. As an application of the Banach-Steinhaus theorem, it is shown that at any given point t0, the set of 2p-periodic continuous functions on R whose Fourier series diverge at t0 is dense and fat in the collection of all 2p-periodic continuous functions on R. Other topics covered included invertibility, Neumann's theorem, Riesz's lemma, and the elementary spectral theory of bounded linear operators.

Topics covered in the last section include Bessel's inequality, the Riezs-Fischer theorem, and the existence of Hilbert bases. Several equivalent conditions for an orthonormal subset of a Hilbert space to be a Hilbert basis are given. As in the case of Hamel bases for vector spaces, we prove that any two Hilbert bases of a given Hilbert space have the same cardinality.

Chapter 5 explores the most important properties enjoyed by the Banach space C(X). We begin by investigating equicontinuity and the Arzela-Ascoli theorem. The Weierstrass approximation theorem is obtained as a consequence of Bernstein's theorem, obtained via Korovkin's theorem on positive linear operators. The Baire category theorem and the Weierstrass approximation theorem are then used to show that most ontinuous real-valued functions on [a,b] are nowhere differentiable.

Chapter 6 presents some applications of the theory developed in the previous five chapters, particularly the Baire category theorem, the Banach fixed point theorem, and the distance formula for inner product spaces.

Section 6.1 characterizes closed subsets of certain types of metric space X as sets of discontinuities of real-valued functions defined on X. The Baire-Osgood theorem is stated and proved.

Section 6.2 introduces Gram determinants as a way to compute the distance from a point to a finite-dimensional vector subspace M of an inner product space X When X=CL^2[0,1] ... we derive Muntz's theorem.

Section 6.3 is the longest section of the book. It develops many fundamental results in the theory of differential equations, with an emphasis on existence and uniqueness of solutions, and the maximal interval of existence of solutions.

How to use this book

The suggestions given here serve only as a very general guide.

1. This book has enough material for use in a 2-semester introductory course in functional analysis.

Chapters 0 and 1 should always be covered, since they form the pre-requisites for the remaining chapters.

2. For students with little or no previous exposure to mathematics beyond calculus and linear algebra, a one-semester course on basic metric-space topology can be given using the Chapters 0-1 and Section 5.1.

3. For students who have had a first course in analysis and some working knowledge of point-set topology in Rn, a variety of courses can be given:

b. A course on general normed and Hilbert spaces: Chapters 0--2, Section 3.1, most of Chapter 4

4. For students with a good background in basic point-set topology, only some sections of Chapter 1 need be covered. In this case, most of Chapters 2 and 3 can be covered in one semester; parts of Chapters 4--6 can be studied as time permits. For a course with emphasis on applications of functional analysis, Baire's category theorem, the Banach fixed point theorem, and the distance formula developed in Chapter 4 for inner product spaces should be quickly covered. Then one can proceed with Chapter 6. If one wishes to discuss the Volterra and Fredholm integral operators, Sections 3.1, 3.2 and 3.5 should also be considered.

5. For more advanced students with a background in point-set topology and who are familiar with basic notions in normed spaces and Hilbert spaces, most of the material up to and including Section 2.4 can be quickly skimmed through. Then one can proceed with sections 2.5-2.11, Chapter 3, parts of Chapter 4 and all of Chapter 5.

6. A graduate level introduction to functional analysis (without Lebesgue integration) can be based on the more advanced topics of the book. In particular, such a course can include the material on topological vector spaces, the various results of Kolmogorov, Tychonov, Korovkin, Bernstein, Muntz, Baire-Osgood, and Stone-Weierstrass.


Return to main page for this book